We came about an oriental themed yurt because Katherine’s old next door neighbour had two 80+ year old antique cupboards that were taking up a lot of space in his garage, we bought them at a steal and based the whole yurt around them, the round bed is a nod of appreciation from us to the yurt site that inspired us to want to build our own (Sara and Darren at the now formally York Yurts).

We actually used to have a heated water bed in this yurt but (and this couple will forever be nameless) somebody bust it so now it has a kingsize Vispring mattress in there although the bed looks and feels much bigger with its huge surround.

The oriental yurt has electricity so you can charge your phones or plug in a projector and watch a film on the yurt curtain in the privacy of your own yurt, there is a lamp in here which is adequate enough to light up the yurt but not intruding enough to take away from that fact that you are camping. 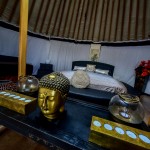 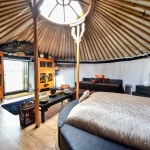 This yurt has a large sofa thats actually a bed but to look at it you wouldn’t know it. This makes it a great yurt for families as you don’t need to set a camp bed you if you have a child or two infants.

This yurt has a heater and electricity so if your children are anything like mine you will need that to charge up whatever they use to be on social media or to watch tv then this is a fantastic yurt.

It feels like it has more space than the other yurts here even though they are all the same size (the tardis yurt) this is definitely a favourite for many of our returning guests.